Dear Friend,
Entering 2018, we wish you a wonderful New Year.
We will continue working with you in helping to bring attention to the many people whom we see as giving the world a spark for hopefulness and love.
2017 can be remembered as the year when China's president Xi Jinping consolidates his China dream beyond the imagination of the dystopian novel Nineteen Eighty-Four.
Thought police are in all China's internet surveillance with the requirement of real name registration.  WeChat, the all-in-one messaging calling app is being used by China as a national id that will make any user responsible for its own group chat as the government of China continuously censor speech and expression in pushing for their catch all phrase of "maintaining security".  Western corporations became collaborators in censorship when Apple removed VPN apps that allow Chinese in China to bypass China's Great Firewall.
The death of Nobel Peace Laureate Liu Xiaobo in July brought to the world attention that any long term imprisonment by China may in fact be a death sentence.  Liu was sentenced to 11 years in prison on Christmas day 2009; detained in 2008, he had less than two years left in his sentence.  Yang Tongyan, 杨同彦 a writer and member of PEN, died in November after being released for medical parole in August for a brain tumor.  Yang was sentenced to 12 years in prison in 2006 and was only a few months towards the end of his sentence. In 2014, attorney Cao Shunli 曹順利 died after she was detained in 2013 as she was leaving for Geneva for a review on China's human rights record. This pattern of causing the resultant death of detainees or prisoners in China is alarming.  Currently, Visual Artists Guild is concerned that Huang Qi, 黃琦,a human rights activist who started an early web site "64 Tianwang" since 1998 and imprisoned twice before, is now in danger of dying while in custody.  The 8 years sentence in December of blogger Wu Gan 吳 淦 is certain to result in his health deterioration in the future.
While the world may celebrate China's commitment to the Paris climate accord, few recognizes that in a totalitarian government, the authorities can set their goal for peak emission by 2030 with no regard to how it will impact ordinary citizens. Minister of Environment Protection Li Ganjie's 李干杰; order to stop coal use by three million housholds in 28 cities around Beijing resulted in the destruction of coal stoves of those homes when replacements were mostly not ready during the depth of Beijng's deadly winter. Within the same policy of pollution control, China started to expel its low-end population "低端人口" when a fire broke out in late November in Beijing where 19 people died.  The forced eviction and demolition of homes for migrant workers on Beijing is part of the government plan to limit population in Beijing in co-ordination with president Xi Jinping's plan for a "beautiful China" 美好生活as announced during the 19th Congress in October.
Perhaps the most Orwellian nightmare China's government is doing is the collection of biometric DNA of the people in Xinjiang province where 11 million Uighur Muslims live.  With pressure from China, Egypt and other countries have forced the return of Uighur students back to China where they have disappeared.  One would wonder whether such data could be used for China's organ trade.
Self-immolation in Tibet continues with seven this year.  We must convince the Tibetans that ending one's life will not help to end the repression.  Each and everyone of their life is necessary to continue to preserve Tibetan culture and language for the future.
Bringing attention to China's human rights violations will help to give those in China fighting for their rights a ray of hope that the world is watching.  China's government may proclaim beautiful policy to the world but the facts of such policy actions will belie the government's declarations.  The Chinese Communists Party should review their own disastrous history to truly understand why they continue to fail their people despite such flowery policy such as the Great Leap Forward when over 40 millions died of the biggest man made famine in human history.
Ann Lau
Chair, Visual Artists Guild

Commemoration of the 29th anniversary of Tiananmen Massacre

In the spring of 1989, Beijing erupted with the largest spontaneous demonstrations the Peoples’ Republic of China had witnessed in its 40-year history.  The pro-democracy movement quickly spread to over 30 cities around China before the world witnessed the horrors of the government’s brutal crackdown.  As the Chinese people fled from the tanks and guns, they asked the international press to let the world know the truth.

Honoring and Celebrating the Freedom of

Zhang Lin 張林 Mr. Zhang Lin is a human rights activist who as a student participated in the 1989 pro-democracy movement in China.  He had been imprisoned on and off in China for over 13 years since 1989 for his relentless support for a democratic China and human rights in China.  His younger daughter had been called the youngest prisoner of conscience when the authority prevented her from attending school as a punishment for her father.  She and her older sister successfully left China for the US five years ago and have been hosted by Reggies Littlejohn, the President of Women's Rights without Borders.  Ms. Littlejoin is the recipient of Visual Artists Guild's 2012 Spirit of Tiananmen Award.  Mr. Zhang was able to escape from China early this year.

Ms. Li Wenzu is the wife of human rights attorney Wang Quanzhang.  Mr. Wang was one of the over three hundred human rights attorneys and assistants who were swept up by China's government in September 2015.  While all those who had been detained had since been either sentenced to jail or released under certain house arrest, Mr. Wang had not been heard from since.  Ms. Li has continuously been appealing to the government for information about Mr. Wang but to no avail.  On April 4 this year, the 1000th of Mr. Wang's disappearance, his wife started a 60 miles walk from Beijing to Tianjin where she believe her husband was held.  However, after six day, she was forcibly returned back to Beijing and has been under house detention since.

Honoring and Celebrating the Freedom of

Dhondup Wangchen  當知項欠 Tibetan film-maker Dhondup Wangchen was arrested in March 2008 after he had completed filming a series of interviews with Tibetans who had bravely voiced their feelings on the upcoming Beijing Olympics. The interviews were smuggled out of Tibet and made into a remarkable film, Leaving Fear Behind, which has been screened in more than 30 countries and was secretly shown to journalists on the eve of the Beijing Olympics. He was sentenced to six years in prison for "subversion" and subjected to prison labor and months of solitary confinement.
Mr. Wangchen successfully escape to United States last year.

UPDATES ON PAST RECIPIENTS

Environmentalist Wu Lihong, 2013 recipient of Visual Artists Guild's Champion of Freedom of Speech Award, is still under surveillance by the public security of China.
Mr. Wu also received the 2007 Conde Nast Traveler Envoronmental Award.
His daughter will attend this event to update on what her father is struggling to do for Lake Tai.


Poet Zhu Yufu, also 2013 recipient of Visual Artists Guild Champion of Freedom of Speech Award, has been released from prison.
His daughter will attend this event to update about her father. 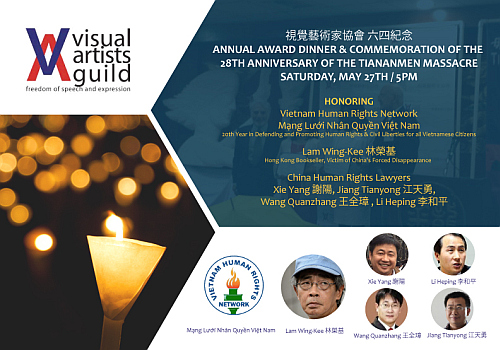 Human rights lawyers Jiang Tianyong  江天勇and Xie Yang謝 陽 were paraded on Beijing-backed Hong Kong Phoenix TV  on March 1, 2017.  Jiang "confessed" that he fabricated Xie's prison torture and Xie denied that he was tortured.  Xie was detained since July, 2015.  Jiang had been detained several times and last was disappeared in November, 2016.

I'm Xie Yang, and I hereby declare: Today I met with my attorney, Chen Jiangang, again. All my statements here are completely true and out of a free heart. I want to declare that I am completely innocent.  I have been suffering from all kinds of severe abuse and torture since I was arrested on July 11, 2015. Nevertheless, I have never plead guilty, because I am not guilty.  If someday I admit any guilt, whether in written form or voice recording, it would definitely not be out of my own will. It would be either caused by continued torture or to get a chance to be bailed out and reunited with my family. Both my family and I are under immense pressure now as the officials ask me to confess and stop talking about my torture. Once again, I am innocent. Xie Yang Jan. 13, 2017

To RSVP for ticket: www.museumoftolerance.com/PatriaOMuerte

.
Or a commemorative T-shirt depicting the images below.

Please email us with your choice & shipping info.