Please tell a friend.
If you plan to organize similar protest around the world, please let us know.
Support the right of Freedom of Speech and Expression!
Cao Xiaodong has committed no crime! He must be released!

What: Demand the immediate release of  AIDS activist Cao Xiaodong, 曹小东
Cao had uploaded a photo of himself tearing a portrait of Mao Zedong on the internet.
He was picked up by the local police of Henan province in China on Thursday, November 1 and has not been released as of today.
It is feared that his friends who also had their photo tearing up Mao's portrait uploaded may also be picked up.
When:Action Protest: Sunday, November 11, 2012, 2 p.m.
Where:Consulate of the People's Republic of China
443 Shatto Pl., Los Angeles, Ca. 90020 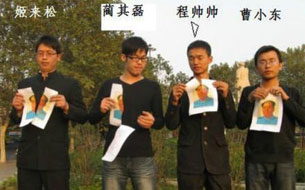 Cao and his friends, Cao on the right