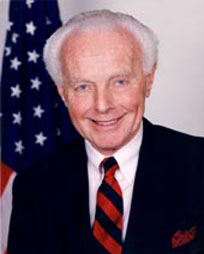 
Tom Lantos had consistently stood up for the oppressed around the world; his most recent actions have been:
During a Congressional hearing in February, 2006, Tom Lantos repeatedly asked Google, Cisco, Microsoft and Yahoo individually as to whether they are ashamed of what their company had done in China. When Microsoft answered that they were only complying with legal orders in China, Lantos asked, "Well, IBM complied with legal orders when they cooperated with Nazi Germany ... Do you think that IBM during that period had something to be ashamed of?"
In a November, 2007 hearing, Tom Lantos once against expressed concern of Yahoo's complicity in the repression apparatus of China's government.  Yahoo later apologized to Congress for lying during the hearings.
In April, 2006, Tom Lantos with four other Congressmembers were among eleven people arrested at the Sudan Embassy during a rally against the Darfur genocide.  Previously, Tom Lantos sponsored several legislations on Darfur and in 2004 Congress officially called Darfur genocide.
In October last year, Tom Lantos gave voice to the recognition of the genocide of Armenians in Turkey during WWI by sponsoring a legislation.
In December last year, the House passed the Lantos Burma Human Rights Act against the military junta government.
Tom Lantos stood for the founding principles of the United States; his legacy will forever be enshrined in the annals of human rights actions of his adopted country.
Congressman Tom Lantos will be deeply missed.
Ann Lau
Chair, Visual Artists Guild

WASHINGTON (AP) - Rep. Tom Lantos of California, the only Holocaust survivor to serve in Congress, has died. He was 80.

Spokeswoman Lynne Weil said Lantos died early Monday at the Bethesda Naval Medical Center in suburban Maryland. He was surrounded by his wife, Annette, two daughters, and many of his 18 grandchildren and two great-grandchildren.

Annette Lantos said in a statement that her husband's life was "defined by courage, optimism, and unwavering dedication to his principles and to his family."

Lantos, a Democrat who chaired the House Foreign Affairs Committee, disclosed last month that he had been diagnosed with cancer of the esophagus. He said at the time that he would serve out his 14th term but would not seek re-election in his Northern California district, which takes in the southwest portion of San Francisco and suburbs to the south including Lantos' home of San Mateo.

The timing of Lantos' diagnosis was a particular blow because he had assumed his committee chairmanship just a year earlier, when Democrats retook control of Congress. He said then that in a sense his whole life had been a preparation for the job - and it was.

Lantos, who referred to himself as "an American by choice," was born to Jewish parents in Budapest, Hungary, and was 16 when Adolf Hitler occupied Hungary in 1944. He survived by escaping twice from a forced labor camp and coming under the protection of Raoul Wallenberg, the Swedish diplomat who used his official status and visa-issuing powers to save thousands of Hungarian Jews.

Lantos' mother and much of his family perished in the Holocaust.

That background gave Lantos a moral authority unique in Congress and he used it repeatedly to speak out on foreign policy issues, sometimes courting controversy. He was a strong supporter of Israel and a lead advocate for the 2002 congressional resolution authorizing the Iraq war, though he would come to be a strong critic of the Bush administration's strategy there. In 2006 Lantos was one of five members of Congress arrested in a protest outside the Sudanese Embassy over the genocide in Darfur.

Lantos, who was elected to the House in 1980, founded the Congressional Human Rights Caucus in 1983. In early 2004 he led the first congressional delegation to Libya in more than 30 years, meeting personally with Moammar Gadhafi and urging the Bush administration to show "good faith" to the North African leader in his pledge to abandon his nuclear weapons programs. Later that year, President Bush lifted sanctions against Libya.

In October 2007, as Foreign Affairs chairman, Lantos defied administration opposition by moving through his committee a measure that would have recognized the World War I-era killings of Armenians as a genocide, something strongly opposed by Turkey. The bill has not passed the House.

Tall and dignified, Lantos never lost the accent of his native Hungary, but his courtly demeanor belied the cutting comments he would make in committee if the testimony he heard was not to his liking.

"Morally, you are pygmies," he berated top executives of Yahoo Inc. at a hearing he called in November 2007 as they defended their company's involvement in the jailing of a Chinese journalist.

"This is about as believable as Elvis being seen in a K-Mart," was his retort to a witness testifying before a subcommittee he headed in 1989 that led a congressional investigation of Reagan-era scandals at the Department of Housing and Urban Development.

Lantos was elected to Congress after spending three decades teaching economics at San Francisco State University, working as a business consultant and serving as a foreign policy commentator on television. He challenged GOP incumbent Rep. Bill Royer in 1980 after other Democrats passed up the chance to run, and won narrowly, with 46 percent of the vote. He subsequently won re-election by comfortable margins.

"It is only in the United States that a penniless survivor of the Holocaust and a fighter in the anti-Nazi underground could have received an education, raised a family and had the privilege of serving the last three decades of his life as a member of Congress," Lantos said upon announcing his retirement last month. "I will never be able to express fully my profoundly felt gratitude to this great country."

Lantos came to the United States in 1947 after being awarded a scholarship to study at the University of Washington in Seattle. In 1950 he married Annette, his childhood sweetheart, with whom he'd managed to reunite after the war. The couple moved to the San Francisco Bay area so Lantos could pursue a doctorate in economics at the University of California, Berkeley.

The first major bill Lantos passed in Congress was to give honorary American citizenship to Wallenberg, whom he called "the central figure in my life." But Lantos sometimes shied away from talking about his experiences in the war. When he joined a lawsuit in 1984 to seek Wallenberg's release from the Soviet Union - Wallenberg was captured and imprisoned by Soviet troops after World War II - Lantos told The Associated Press that he "didn't want to dwell on the details" of the dangers he faced from the Nazis.

Lantos joined the Hungarian Underground after the Nazi occupation but was captured and sent to a forced labor camp 40 miles north of Budapest, according to the biography on his congressional Web site. He was beaten severely when he tried to escape, but feeling he had nothing to lose he made another attempt. This time he made it back to Budapest and to one of the safehouses that Wallenberg had established.

Lantos credited Wallenberg's protection, his own Aryan appearance - blond hair, blue eyes - and a good measure of luck with helping him survive the war. But he said that at the time he didn't think he had much of a chance of staying alive.

"I was sixteen, but I was very old," he said in an interview for "The Last Days," the 1999 book accompanying the Steven Spielberg documentary of the same name that focused on the experience of Hungarian-American survivors.

"The bloodbath, the cruelty, the death that I saw, so many times around me during those few months between March of 1944 and January of 1945 made me a very old young man."

"My life today, given my background, is something I cannot believe possible," he went on to say.

Lantos and his wife had two daughters, Annette and Katrina, who between them produced 18 grandchildren. According to Lantos, his daughters were following through on a promise to produce a very large family because his and his wife's families had perished in the Holocaust.