TIME:        Do join us and be part of the parade.
If you wish to be part of the parade, please email This email address is being protected from spambots. You need JavaScript enabled to view it.
please be there by 10 a.m. to practice our skits.
The parade starts at 11 a.m.

MEET:   On Nina St, between Altadena Dr. and Vindeo Ave. at Pasadena, see Map below

INFORMATION: If you wish to be part of the parade please contact
Visual Artists Guild, Ann Lau 310-433-0697, This email address is being protected from spambots. You need JavaScript enabled to view it.

Hong Kong has been protesting for months with the five demands

5 Dual universal suffrage, meaning for both the Legislative Council and the Chief Executive

Although the extradition bill has been withdrawn, there is a demand to remove the banning of wearing face mask. Dear Friend,
Congratulations! You have done it.  You made a difference.
Last month we wrote to ask you to write to the World Bank Executive Direction regarding China's use of loan from the World Bank for repression.
The World Bank has now rejected a $50 million loan to China's Xinjiang project.
Thank you for your action!
Ann Lau

Dear Friend,
The World Bank is having its annual meeting this week October 14-18 in Washington DC.
Please copy and paste the following letter and send it to
World Bank US Executive Director DJ Nordquist
email to This email address is being protected from spambots. You need JavaScript enabled to view it.
Please title it Urgent: Letter to DJ Nordquist
Please sign your name below.
Ann Lau
Chair, Visual Artists Guild

Dear Ms Nordquist,
I am writing to ask you to review the World Bank's subsidized loans to the Peoples Republic of China.
China is the world's second largest economy.  It has a cash reserves of $3 trillion yet it borrows $2 billion from the World Bank annually.
China's infrastructure spending is meant for control allowing for speedy deployment of the Peoples Liberation Army.
* The Qinghai-Tibet railway which former China President Jiang Zemin admitted that it was a political decision and not commercially viable.
* The Hong-Kong-Zhuhai-Macaru bridge has a similar purpose.
* The Hong Kong high speed railway even instituted locations within Hong Kong allowing China's officials to administer China mainland law in violation of the One Country Two Systems.
* According to analysis by German Xinjiang expert, in 2017 China spent $2.96 billion in tripling the size of 39 concentration camps in Xinjiang, China.
* China's One Belt One Road infrastructure loan is a predatory initiative which resulted in Sri Lanka giving control of its port and surrounding areas to China for 99 years.
China's human rights violations are well known: more than a million Uyghur Muslims in concentration camps which China claimed as vocational camps in addition to the persecution and torture of Catholics, Christians, Tibetans and Falun Gong practitioners; jailing and torture of human rights lawyers; kidnapping of booksellers outside of China; the imprisonment and death of Nobel Peace Laureate Liu Xiaobo.
The United States should not be a collaborator of China's repression.
As finance is fluid, can one truly separate a loan for an applied purpose may in fact enable another project to be financed?
Please stop financing China's inhuman acts through the World Bank.
Sincerely,

THE CITY OF WEST HOLLYWOOD PRESENTS
VISUAL ARTISTS GUILD
ART & DEMOCRACY VI
The sixth in a series of art exhibitions by Visual Artists Guild with the theme of Art & Democracy.  Our participating artists from all over the world responded with their art works that address the issues of human rights, immigrants rights, democratic aspirations, social justice and freedom of speech and expression.  This event attempts to keep alive the dialogue of Freedom and Democracy and to highlight the 30th Anniversary of the 1989 Tiananmen Massacre and the fall of the Berlin Wall, and the collapse of Eastern Europe.  With this exhibit, Visual Artists Guild hopes to create a space for the world to celebrate human rights, freedom of speech and democracy.  Specials events include artists meet-and-greets, a Democracy Forum and Artists forum.
Of note is two of the three art works by US based Chinese artist Bing Weng that were censored by the City of Cary in North Carolina are going to be exhibited here. 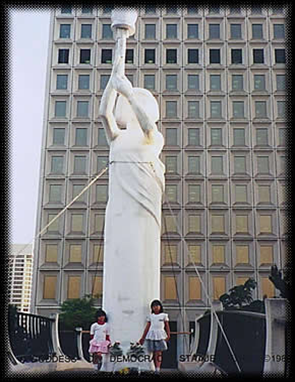 It Itwas Saturday morning. As usual, I was driving my children to Chinatown for them to attend Chinese language school. The ABC radio station cut through programming to report live from Beijing. The reporter was in Tiananmen Square and the loudspeaker was on. Suddenly he said the lights in the Square were turned off and tracer bullets shot across the Square. People were running and there were the sounds of gunfire; he had to get out but then the radio station didn't hear his voice any more but just sounds of people coming through.

Tears streamed down my face. Surely I should have expected that the pro-democracy movement would end with repression but with weeks of my following the news from China, I willed myself to believe that finally China would change.

My ten year old elder daughter asked, "Mama, what is happening?" I answered weakly, "They are getting rid of the students." I feared the worst. After Chinese school, we went to the Chinese Consulate. There were some Chinese students from Hong Kong with their microphone and many others from the community. Older Chinese-Americans brought water and paper cups. We exchanged phone numbers. A reporter was talking to my elder daughter. That evening, the local news showed the reporter asking my daughter if she knew what was going on. Her answer, "The people in China want freedom".

A week later, on a Monday morning, the radio station reported about a replica of the goddess of democracy statue that was crushed in Tiananmen Square appeared in front of Los Angeles City Hall on a pedestrian bridge. Tom VanSant and members of Visual Artists Guild had built the 23 ft replica of the statue. As Tom VanSant attended the City Hall meeting that morning to gain approval for the statue, a 4.5 earthquake happened. The statue did not tumble down and the City subsequently allowed the statue to stay for a month.

My daughters have now grown and have families of their own.

For a short shining moment in the spring of 1989, the people in China, inspired by the students, suddenly found themselves speaking the truth, expressing their own China dream. It was then that they gave each other a precious gift, a gift of freedom, the freedom from fear.

.
Or a commemorative T-shirt depicting the images below.

Please email us with your choice & shipping info.